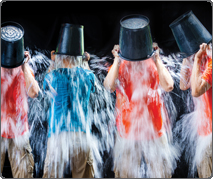 Unless you've been living under a rock for the last decade, you've probably seen this trend on your social media channels: The Challenge. They seem to pop up out of nowhere, then suddenly they're everywhere. Let's dig into what makes some challenges so compelling, and why going viral doesn't always serve the greater good.

What is a Social Media Challenge? A social media challenge typically includes a short video of one or more people doing a specific thing, accompanied by a hashtag naming the challenge (for example, #MannequinChallenge). The activity itself can be anything from performing a dance move (like #HarlemShakeChallenge) to having ice water poured over you (as with #ALSIceBucketChallenge).

The idea is to record yourself doing the activity, post the video to one or more of your social media accounts (along with the challenge hashtag), then invite your friends and followers to do the same thing. The faster and more widely a challenge gets shared, the greater the probability that it will "go viral" within a short period of time. With the proliferation of social media platforms like Facebook, Twitter, and Instagram, popular challenges can achieve global reach within a matter of days.

What Makes a Challenge Go Viral?
While not all social media challenges take off in the same way, all successful challenges share some common elements. Here are a few hallmarks of the top viral challenges:

When celebrities jump on a challenge bandwagon, the exposure is amplified exponentially. Not only do more people see it, by virtue of a celebrity's audience, but participation also goes up because those same fans and followers want to emulate their heroes.

Sharing Isn't Always Caring
While these rules of thumb generally hold true for successful social media challenges, what really drives people to share these challenges far and wide is the universal desire to belong. Participating in a broader movement — even if it's just for fun — can make people feel connected. Sharing their participation is a way of declaring their membership in a larger collective and makes them feel they're part of something bigger. But there's also a darker side. The problem with anything that goes viral is that it's indiscriminate. There's no way to control who sees it, who attempts it, and who passes it on.

This lack of oversight leaves children and teenagers particularly vulnerable to internet challenges that could result in real physical harm, either to themselves or to others.

The infamous #TidePodChallenge in 2018 had kids biting into small laundry detergent packets (said to resemble candy) before spitting the soap from their mouths. Likewise, in the #CinnamonChallenge, participants had to swallow a spoonful of ground cinnamon in 60 seconds without water. Both of these challenges might have spawned an initial thrill with their audience but they carried real medical consequences for those who attempted them.

Viral Challenges Create Connection
The trend of accepting a dare and documenting it on social media has captured the imagination of people around the world. Most of these challenges represent lighthearted fun, bringing the participants together in a common purpose. Maybe it's no surprise that they've "caught on" after all.

FAST FACT: Between July and August 2014, more than 17 million people worldwide participated in the Ice Bucket Challenge and raised over $115 million for ALS research.

What Parents Need to Know

A dare can be irresistible, especially to a teenager. If you're a parent to a young person who spends any time on social media, you should take steps to protect them from potentially dangerous fads.

Here are three things you can do to help keep your child safe from the latest online craze: