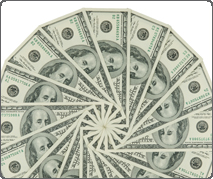 Don't Fall for the Circle Game

I nternet scams and pyramid schemes are an unfortunate part of being online and have been a part of the internet for many years. In fact, a lot of them rely on tactics and plots that even pre-date the internet itself. One such scam has been making the rounds again lately. It's got many names, including the Circle Game, the Blessing Loom, and the Money Board. It promises a big payoff in exchange for a small investment. But, like a lot of things online, if it seems too good to be true, it is.

What Is the Circle Game?
The Circle Game has been floating around the internet for a few years now. If you dig, you can find articles dating back to 2016. It has a history of popping up every few years and making its way through the world with promises of easy money.

The Circle Game typically begins with an invitation to join. To get started, you have to invest a small amount of money, usually around $100. Once you've paid, you get added to the outer edge of the circle, and it's your turn to start sending out the invitation to people you know. The circle grows as you bring people in. Once you recruit enough people, you move to the middle, collect $800, and either leave the game or pay another $100 to start again.

It seems easy enough, but this is your basic pyramid scheme. Some people will make money, but most people will lose their $100 — or more if they keep trying to play the game.

Reasons to Avoid
It The obvious reason you should avoid this game is that it's a scam. To have a chance at winning the promised $800, you have to recruit people. This means exposing your friends and family to the same scam.

At any given point in the Circle Game, in order for the people on the outer edge of the circle to make money, 64 new people need to be recruited. Unfortunately, it usually falls apart before enough people join. Most participants won't make any money, and they'll lose their initial investment, too. So not only would the Circle Game cost you money, it would also cost your friends and family money — and you risk damaging your relationships along with diminishing your bank account.

The other important reason to avoid the Circle Game is that depending on state law, it can be illegal. If you bring too many people into the game and they lose their money, you could end up in trouble. The potential consequences of jail time and fines are simply not worth the risk.

What's more, your Facebook account may be terminated if you're caught participating in "unlawful multi-level marketing, such as a pyramid scheme."

How to Spot an Online Scam
To avoid getting sucked into online scams like the Circle Game, remain skeptical of requests for money. Even if the request comes from a good friend or family member, if you have to invest money to make money, it's probably a scam.

If you're not sure whether something is legitimate, do a quick online search. Obvious scams will likely show up in the first few search results. You can also use a fact-checking site like Snopes.com to check the validity of a game. Finally, keep your eyes on the news, as these types of scams will often get local coverage as they move through an area.

What to Do If You Get Scammed
If you do get caught up in the Circle Game, get out as quickly as you can. Then warn the people who recruited you and report it to the Federal Trade Commission. Reporting it can help stop scams like the Circle Game from spreading and may even result in catching the person responsible for starting the game in your area.

What is a Pyramid Scheme?

A pyramid scheme is where new recruits are asked to pay a small amount of money to the person at the top of the pyramid in exchange for the promise of earning more money. Like the Circle Game, you must recruit others for the system to work. As the pyramid gets bigger, the person at the top makes more money, but often new recruits don't make much, if anything. All pyramid schemes eventually collapse, since they're not sustainable. Classic signs of a pyramid scheme include: